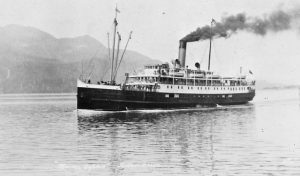 SS Princess Sophia was a steamship of 2,320 gross register tons (GRT) and 1,466 net register tons (NRT), built by Bow, McLachlan and Company at Paisley, Scotland. A strong, durable vessel, she was built of steel with a double hull. Princess Sophia was capable of handling more than just the Inside Passage, as her use on the stormy west coast of Vancouver Island demonstrated. Princess Sophia was equipped with wireless communications and full electric lighting. The ship was launched in November 1911 and completed in 1912. She was brought around Cape Horn by Captain Albert Adolphus Lindgren (1862–1916), who had also brought two other CPR coastal liners, SS Princess Adelaide and SS Princess May, out from Scotland on the same route. As built, Princess Sophia burned coal; however, the vessel was converted to oil fuel shortly after arrival in British Columbia. While not as luxurious as her fleet-mates serving the Pacific Northwest, Princess Sophia was comfortable throughout, particularly in first class. She had a forward observation lounge paneled in maple, a social hall with a piano for first-class passengers, and a 112-seat dining room with large windows for observing the coastal scenery. -Wikipedia